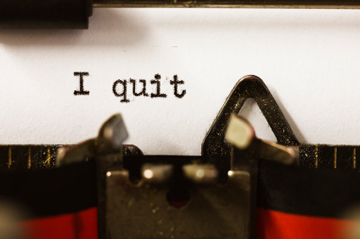 Think you know the signs when a Finance staffer’s about to quit — having lots of doctor appointments, showing up in a suit, etc.? Well, according to new research, the cues that someone is about to jump ship are much subtler.

Tim Gardner, an associate professor at Utah State University’s Jon M. Huntsman School of Business, conducted a study on voluntary turnover and found employees often showed the same behavioral changes in the months leading up to their departures.

But here’s the kicker: They’re not necessarily the kind of behavior changes you’d tend to associate with someone who’s thinking of walking out the door.

What to watch for:

Gardner’s research highlighted 10 warning signs an employee’s about to quit — as well as some warming signs employers commonly associate with job-hoppers but aren’t necessarily indicative that someone’s thinking of leaving.

First, let’s tackle the warning signs someone’s about to hand in their notice. Here’s a list worth passing along to managers so they can help you save checked-out employees before it’s too late:

Of course, it’s possible for one or two of these to apply to an employee who isn’t looking to leave — but even then, it’s still something worth addressing.

And, as you can imagine, the more that apply to a single individual, the more you can bet he or she is thinking of jumping ship.

Something Gardner and his research team — which included Huntsman professor Steve Hanks and Chad H. Van Iddekinge of Florida State University — did think was unexpected were the behaviors that didn’t make the above list.

Gardner and his team found that these behaviors weren’t unique to perspective job-hoppers, therefore they weren’t rated as highly. But, certainly, they’re still concerning.

Info: Gardner & Co.’s findings were included in a research paper that is currently under review for publication.