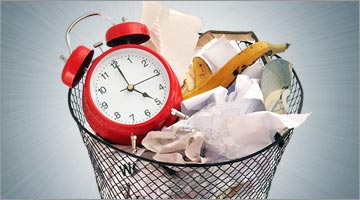 Productivity – of course you want to do everything you can to maximize it in your finance department.

And much of that comes down to timing.

That’s the finding of a recent survey of employees by The Creative Group. It specifically surveyed marketing professionals, but the learning can apply to any type of office worker, Finance included.

Take these findings to make sure you’re structuring your staffers’ days (and your own) to make the most of it.

With year-end fast approaching, making some adjustments now to get staffers in the sweet spot can smooth things this go-around.

When are people most productive?

If you’re looking for the window when the bulk of your finance staffers will be at their most productive, look at the first half of the workday.

From 10 am – 12 p.m. is the No. 1 answer in the Creative Group study. Nearly a third of folks ID’d that as their productivity peak.  So if at all possible, you want to avoid scheduling  productivity-crushers like meetings at that time.

You might even consider some Finance Quiet Hours so staffers can really make the most of these hours when they feel they’re firing on all cylinders.

Note: There is a group of people who get the most done from 2 p.m. – 4 p.m. So that might be another option for some uninterrupted work time.

When are they most creative?

If, however, you’re looking to hold a brainstorming session on how to improve Finance’s monthly reporting, try to grab staffers when they’re fresh and just in the office.

From 8 a.m. – 10 a.m. is the No. 1 window for peak creativity, according to the survey. And nearly three-quarters say the morning in general is best for their getting their creative juices flowing.

You probably won’t have a task that requires major creative input every day. But when you do, you’ll want to time it so that you get the most from your staffers.

Make their findings work better for you

Granted, the data here is based on other people’s views of their productivity and creativity levels. Your own staffers may have different opinions on when they’re most productive and most creative.

This little exercise can help your people figure it out for themselves.

Let the survey serve as a springboard to get your own team members’ opinions.

Create a form where you block the workday into two-hour intervals, Monday through Friday. Then for a week, have your people track when they’re feeling particularly productive or creative.

Patterns should emerge. And even if you can’t restructure the way Finance runs as a whole, individual staffers may be able to use their findings to their own advantage to get the job done more efficiently and effectively.

And that’s great for your department as a whole.