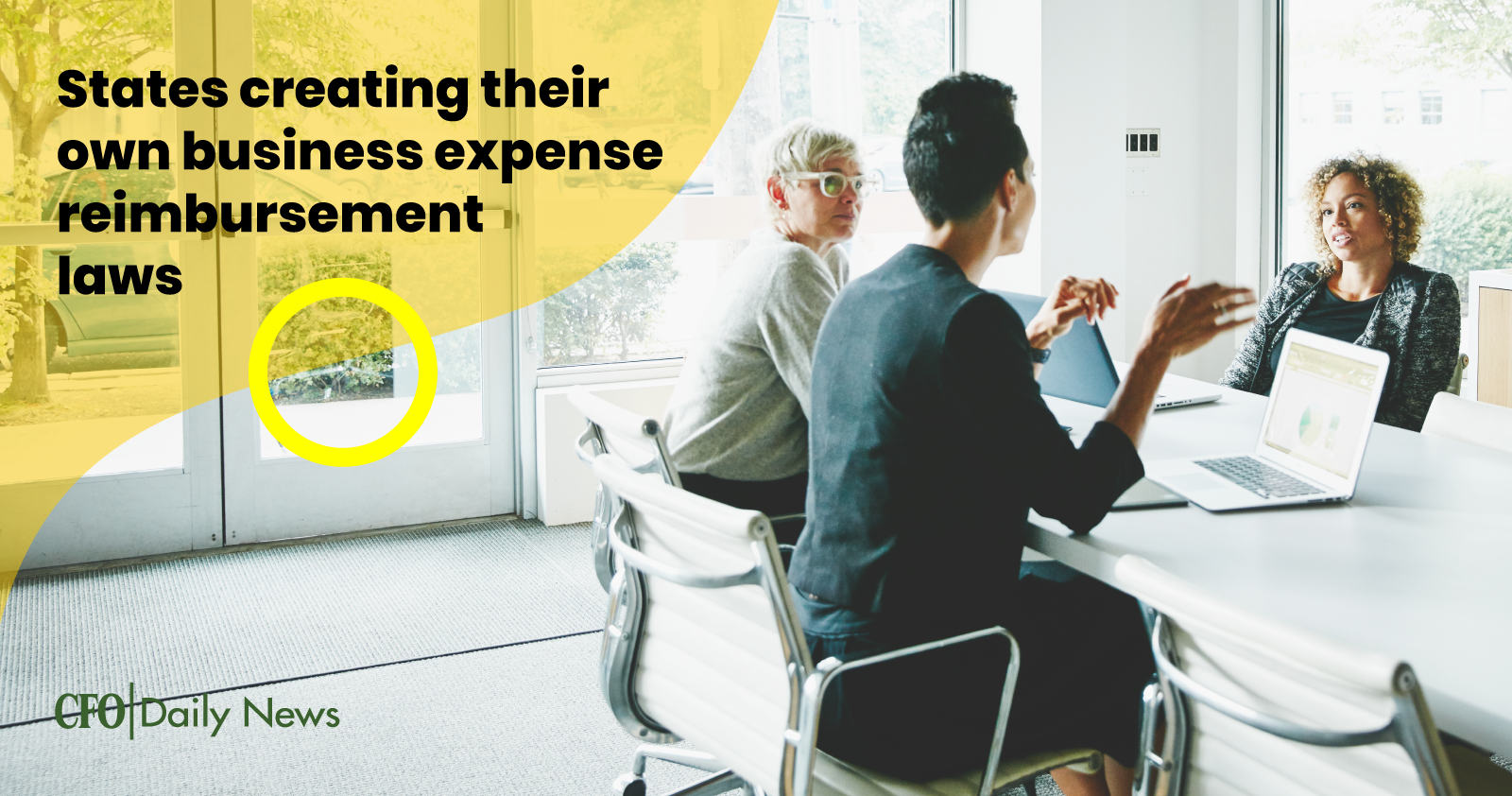 Expense reimbursement is getting more and more complicated for your finance department, due largely to a newer legislative trend.

As if IRS regulations weren’t enough to keep up with, some states are adding their own expense reimbursement laws that your staffers will have to comply with, too.

Essentially, these are laws requiring companies to reimburse employees for “necessary expenditures” incurred on the job. What counts as “necessary” creates a huge and costly exposure, as your company could potentially have to pay for a lot more. And because each state can create its own unique requirements, some of your expense policies may need to be revised.

Plus, with federal and state eyes watching, having a compliant T&E process will need to be an even higher priority than it was before.

This state’s a prime example

Which states are at the forefront of this legislative movement?

Recently, Illinois modified its Wage Payment and Collection Act to include expense reimbursement rules. As of Jan. 1, 2019, expenses are considered “necessary expenditures” and reimbursable if:

1. Your company required or approved the employee to make the expense.

2. The employee submitted the expense for reimbursement with proper supporting documentation* (i.e., a receipt) within 30 calendar days of when it was incurred.

*Note: Illinois says the employee can offer a signed statement regarding the expense instead of a receipt if supporting documentation doesn’t exist, is missing or is lost.

Other states on board

Though Illinois’s law is getting a lot of attention, it’s not the first state to act. Other jurisdictions that already have expense reimbursement laws on the books include:

Generally, your department knows what typical business expenses states will expect to be reimbursed, like transportation, lodging, meals and entertainment. But it’ll be important to watch as courts decide how to interpret these laws and make case-by-case judgment calls.

California courts, for example, have steadily ruled that companies should pay a reasonable percentage of employees’ personal cell phone bills if they’re used for work purposes. Courts in the Golden State have also said companies should pay for similar items like Internet expenses, data plans and other computing expenses.

How to stay compliant

As states continue to address expense reimbursement in legislation and in court, it’s important for Finance to stay vigilant and proactive.

First, double-check if your own state has any laws – or any legislation circulating that could lead to new rules in the near future. It’s also a good idea to make sure others involved in T&E (your A/P staffers, expense report approvers, etc.) are aware that these state-level laws are unfolding.

As mentioned, these new laws may require your department to tweak its current T&E policies and practices to align with state-specific rules. For example: Companies usually mandate receipts. But if you work in Illinois, state law now says employees can provide “a signed statement” if they lose a receipt. You’ll need to decide how to address and communicate any changes companywide.

Lastly, you know these new business expense reimbursement laws could impact your budgets going forward. For example, California companies required to pay for employees’ cell phone bills now need to allot for this massive expenditure. You’ll want to proactively account for these business expenses in your T&E budget to stay on track financially and prevent issues.