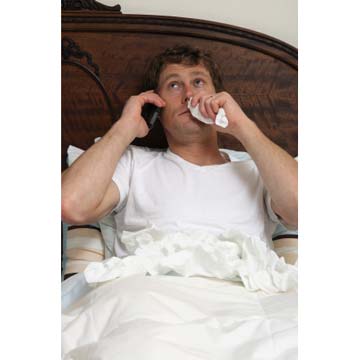 There are some professions you’d expect to be more likely to catch the flu than others. But you probably didn’t expect Finance to be among them.

Yes, doctors, nurses and teachers are especially susceptible to germs of all kind, the flu notwithstanding.

But a new report from Staples advantage says there are other professions that are also at greater risk for the flu. Specifically:

Many of these sound like finance staffers’ job descriptions.

To make matters worse, finance staffers are even more likely to commit the biggest misstep when they do fall to the flu: They keep coming to work!

They’re far from alone on this one: Almost half (47%) of Americans who have the flu stay home less than two days. That’s despite the fact that they know at least three days is more appropriate (and a medical professional will tell you even longer).

And with this being Finance’s busiest time of the entire year, most staffers are going to try and drag themselves in so as not to leave their co-workers in the lurch.

But that may be the worst thing they can do.

After all, if they come in and “share the wealth” with colleagues, you’re looking at the possibility of your entire staff getting seriously ill.

The good news is, there are several steps you can take to minimize the toll this year’s flu takes on your finance department – and your department members.