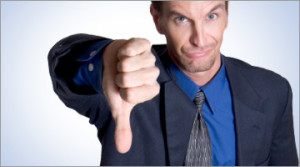 Business has a language of its own — and it’s often pretentious, trite and a vehicle for avoiding having to say anything meaningful. Guest poster Tom Jeffries of Bizdaq outlines the 10 most irritating business phrases we’re likely to be tortured by this year.

As anyone who has worked in an office can attest, the language of business is filled with tired clichés, overwrought sentences and unnecessary jargon. The proliferation of this “management-speak” was probably once a good thing – phrases which saved time and allowed colleagues to converse in a quicker manner will have helped productivity.

Over time, though, the overuse of these business phrases has grown tiresome, and is leaving some business owners, and employees, weary of anyone who uses them.

We’ve all done an internal sigh when we’ve heard a colleague use terms like “over-arching”, “core competency” or the dreaded “corporate values.” But it’s not just limited to these three phrases.

To find out which terms were most disliked among small and medium businesses, we at Bizdaq asked 500 of our customers for which business phrase they hate the most. We found that while there are many business phrases which are used on a daily basis, there were ten in particular which angered people the most. Take a look:

To ideate means to come up with ideas, and we can only think that the term was created to replace the term “brainstorm”, which is falling out of favor. This term was tenth most hated because it’s unnecessarily complicated and makes the user sound pretentious – especially when “come up with ideas”, which it’s replacing, is just as effective.

With the rise of taxi-hailing app Uber has come a whole host of apps and businesses based on generating demand online for a service which is then provided offline. Said businesses are then using the familiarity of Uber to describe themselves – “we’re the Uber for dog walking” or “we’re the Uber for laundry,” for example. While there’s nothing explicitly wrong with this, the sheer number of businesses piggybacking on Uber’s success has earned it the ninth spot on the list.

Low hanging fruit is a term used to describe an easily achieved task, and is a synonym for “quick win”. This term has drawn negative attention not just for its overuse, and also for the way it’s used. According to respondents, the term “low hanging fruit” is so often used by managers that it’s lost its power, and has become a very tired cliché.

Mission critical refers to something which is vital to the functioning of a project or organisation. The use of this might be sensible in space exploration; however in an office it isn’t as necessary. This over-dramatisation of mundane and everyday topics has leads to more eye-rolls than inspired employees, and it’s used regularly enough to reach number seven on the list.

Growth hacker, or growth hacking, is a phrase used to describe carrying out tests to identify the quickest way to grow a business. Whilst this phrase started out as a good, descriptive term, its overuse in blog posts and emails (all touting mainly the same tips) has seen it rise in the most hated terms this year.

Synergy is a management-speak term for teamwork, which is a much more useful word to use. Despite this, the word is used regularly in offices the world round – much to the annoyance of employees who would rather “cooperate”, “teamwork” or “collaboration”. The term draws the ire of employees who both agree that it is unnecessary and it can confuse people who are unfamiliar with it.

To “deep dive” into something in business is to quickly immerse a group or team into a situation for problem solving or idea creation. Whilst the term will have started with good intentions, the notion that all it would take to solve a problem is to take a “deep dive” into it is enough to make it number three on the list.

To leverage in business is to use something to maximum advantage. The term is used almost exclusively by more senior employees, in situations like “leveraging our social media,” etc. It’s disliked for being both confusing and often misused.

Mumpreneur is a term used to describe a woman who combines running an enterprise with looking after her children. The term comes out as the most hated for the (some respondents say needless) addition of a gender to the term “entrepreneur”. Being a parent isn’t a defining part of being an entrepreneur, and many “mumpreneurs” feel that the term is sexist, which is the reason it’s number one on the list.

Although many buzzwords and business phrases start out as fairly innocuous terms to save time, they can quickly become clichés which affect staff morale and productivity as they search through Google to find out what some business phrases mean. Since the phrases exist to replace another word or term, it’s always best to just say what you mean, rather than try to make it sound more interesting by using buzzwords.

Tom Jeffries works for Bizdaq, and is interested in both small business and language. He often writes about small business for the Bizdaq blog and on other websites.