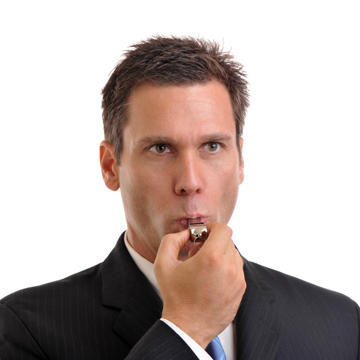 Employee complaints — i.e., “whistleblowing” — about a company’s ACA compliance are a top reason firms get audited for healthcare compliance in the first place. And now that the feds have released the final rule on the topic, Finance pros should pay close attention to exactly what’s covered.

The DOL’s Occupational Safety and Health Administration (OSHA) just published a final rule on handling whistleblower complaints under the ACA.

The final rule sets up procedures and time frames for handling these types of complaints.

The final rule also gives a comprehensive list of the types of complaints that could lead to retaliation charges.

The ACA protects employees from retaliation for receiving Marketplace Exchange (Exchange) financial assistance when purchasing health care through an exchange or getting coverage from their employer.

The law also protects workers from being retaliated against for voicing their concerns over actions they believe violate the consumer protections and health insurance reforms in Title I of the ACA.

If employees feel they’ve been retaliated against in violation of Title I, they can file a whistleblower complaint directly with OSHA.

So now the big question is: What types of employer actions constitute retaliation?

Answer: A lot. According to the final rule, retaliation can include:

That’s a broad list of actions, many of which can often be explained without retaliation. But remember, it doesn’t matter how serious or credible the complaint is, the feds will take every employee complaint very seriously.

So employers need to do everything in their power to prevent a retaliation complaint in the first place. And that means getting managers involved.

Best bet: Put managers and supervisors on alert – and listen. If any grumblings or complaints are heard, you may be able to nip the situation in the bud before the staffer complains of mistreatment.

It’s also a good idea to let managers know about the final whistleblower rule and all of the examples of retaliation listed in those regs.

In addition, employers should have clear, consistent and regular communication with employees about their status (full-time, part-time, seasonal, etc.) and benefits eligibility.

The final rule also listed the time limit employees have for filing whistleblower complaints as well as the specific steps employees must take — for written and electronic complaints — in the first place.

It’s important for employers to keep in mind that an employee (or the representative of an employee) who believes he or she has been retaliated against has to file the complaint with OSHA within 180 days after the alleged retaliation.