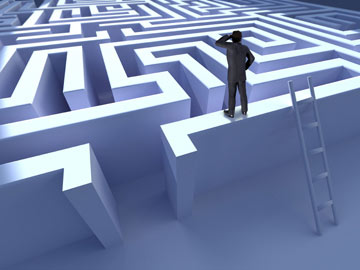 Here’s a surprise: A substantial number of workers at medium-sized companies wouldn’t recognize their chief executive if they met them in the hall.

A new survey from APPrise Mobile finds that nearly a quarter of workers at mid- to enterprise-sized companies cannot name their CEO or even pick him or her out of a lineup. Nearly a quarter (23%) of Americans who work at companies with more than 500 employees are unsure of the name of their CEO.

And we’ve got to wonder: If that large a number can’t identify their CEO, how many know their CFO?

A third of workers surveyed (32%) were not sure they could identify their CEO if asked to from a lineup. The youngest employees were again less likely to know what their company’s chief executive looked like. Only 54% of those between 18 and 24 year olds were confident of passing the lineup test, compared to 69% of those older than 25.

The survey also found that those early on in their careers are less familiar with company leadership than their more senior colleagues. For those workers just starting out between the age 18 and 24 (Gen Zers), only 66% said they know the name of their company’s chief executive. This compared to 78% of those over age 25.

A matter of geography?

The disconnect is understandable — the overwhelming majority of those surveyed (71%) do not work in the same location as their CEO while slightly less than half (46%) said they have actually met the top brass in person.

The survey found that top executives are falling back on the impersonal and easy to misunderstand means of communication – email, rather than making face-to-face or similar types of efforts.

More than two-thirds of those responding to the survey (69%) pinpointed email as the most common method of communication from the organization’s top executive.

Clearly, this lack of communication doesn’t exactly enhance a company’s chances of increasing employee engagement. Gallup’s State of the American Workplace report has estimated that disengaged employees cost the businesses in the U.S. approximately $450 to $550 billion each year.

What’s to be done? The results of the survey suggest that increased communications (especially from senior leadership) is critical to employee engagement and, if done consistently and effectively, can help to reduce these costs while bringing additional value to businesses.

The survey found that only 55% of employees at larger businesses feel like they fully understand the company’s mission statement. At the same time, nearly a quarter of respondents (23%) stated that they believe they would better understand their company’s objectives if they received more regular and meaningful communications from their top execs.

Increased communications from the top bosses would also lead many employees to be more motivated (16%), recommend their job to others (9%), work harder (8%) and turn down other jobs (6%).

The findings were based on a Google Consumer Survey of 1,000 respondents in the United States that say they currently work for a company with 500 or more employees.