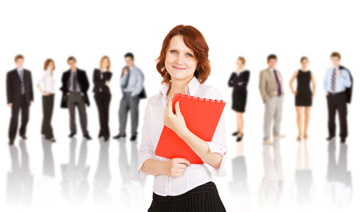 How many women are in your finance department? According to a new survey, women are breaking through the finance glass ceiling at a faster rate than ever. But there’s still plenty of room for improvement.

Women in high level positions at well-known companies like Twitter and Apple have been getting a lot of press recently, mostly due to the fact that there are so few of them.

But there’s good news for women in Finance: The amount of growth opportunities for women in financial roles are higher now than they were a decade ago, according to a new survey.

Moving up the ranks

Almost half (42%) of CFOs surveyed agreed that women have more growth opportunities than they did ten years ago. Of that percentage, 30% said they have somewhat more and 12% said they have significantly more room to move up the corporate ladder.

The survey contributes some of those opinions to the fact that several organizations have been working hard to promote the idea of female finance professionals.

But some of the female survey-takers believe it to be otherwise. One female accountant noted that not only are women getting more opportunities to advance in Finance – they’re taking those opportunities and running with them. And some of them are running straight to the CFO’s office.

However, while more women are becoming CFOs and enjoying moving up the financial ranks, it’s important to remember that ensuring a diverse staff is still something to continue striving for.

Fifty-three percent of the CFOs surveyed believed that opportunities for women in Finance were the same as a decade ago, and 4% said there were less now than ever. These numbers indicate that Finance has a long way to go in terms of letting female professionals into what used to be an all-boys club.