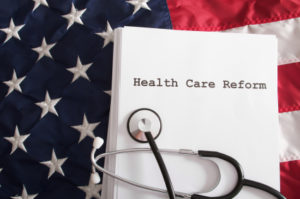 It’s official: Less than a week after the Senate revealed their revised ACA replacement bill – the Better Care Reconciliation Act of 2017 – Senate Majority Leader Mitch McConnell decided to abandon efforts to get the bill passed.

GOP Senators Rand Paul (KT) and Susan Collins (ME) had already stated they wouldn’t vote for the legislation.

The bill, which aimed to pass with Republican-only support, could only afford to lose two Republican votes and still pass. The revised Senate bill included a number of changes was geared toward appeasing Conservative-leaning GOP senators.

As of press time, McConnell said he plans to have the chamber vote on a straight ACA repeal. That repeal process would include a two-year delay, McConnell added.

Legal experts, however, believe getting enough support for an outright repeal would be even more difficult than passing a replacement bill, and there’s already reports surfacing that the move could be scrapped before its even put to vote.

What the bill included

As HR Morning covered previously, the revised Senate bill that eventually failed did include several key differences from the original (and from the bill passed in the House). Those changes included:

Where the ACA requires insurers to meet minimum requirements that include coverage for 10 essential health benefits, the revised bill would allow insurers to offer cheaper, slimmed-down coverage if the insurers offer at least one plan which meets the ACA standards.

The revised bill would provide $45 billion to states to help combat the national opioid crisis. While this is well short of what experts say is needed to address the issue, it’s still more than the $2 billion the original Senate bill had earmarked for opioid-crisis funding.

Although the new Senate bill would keep some of the ACA taxes, it would kill two tax cuts that benefited the wealthy and do away with a tax break for high-earning health insurance execs. Both the cuts and the tax breaks were highly criticized aspects of the original Senate bill.

Under the Senate bill revision, people eligible for subsidies to receive tax credits would be able to purchase catastrophic health plans. Plus, anyone would be allowed to buy catastrophic coverage.

The ACA does allow young adult and some additional individuals to buy high-deductible, catastrophic plans featuring low premiums. But federal subsidies aren’t available for these plans — an attractive incentive for healthy individuals with fewer healthcare needs.

The bill would allow individuals to use HSA funds to pay for healthcare insurance premiums.

In an effort to help states reduce premiums in order to stabilize their insurance marketplaces, the revised Senate bill provides $182 billion in funding, an $112 billion increase from the $70 billion set aside in the first draft of the bill.

This story originally ran on our sister site, HR Morning.